Man Boobs or Gynecomastia, also known mannary glands, unkindly as chesticles, is more common that one might imagine. Man boobs are caused by excessive breast tissue, a result of the hormonal increase that affects all boys at puberty, an estimated 50 percent of whom develop Gynecomastia which disappears in most boys to unnoticeable levels with maturity. This condition is not necessarily connected with body weight as Gynecomastia is recognized as a hormonal imbalance that allows excess glandular tissue to form.

Treatment to remove excessive fat and glandular tissue has traditionally been a surgical option however Cryo T-Shock offers a non-surgical option. The surgical solution delivers desirable results however potential side effect and associated risks include downtime and strict post procedure limitations, uneven contours, scarring, pain, bruising and swelling, and high costs prevent many patients from treating their Man Boobs.

The controlled thermal shock delivered by the Cryo T-Shock is considerably different from other modalities used for non-invasive body contouring: cryolipolysis, radiofrequency, high-intensity focused ultrasound, and laser therapy. First because Cryo T-Shock is not limited by treatment area size or location. Other body sculpting technologies destroy fat by initiating necrotic cell death of the targeted tissue.

Cryo T-Shock treatment is different as it causes fat cell apoptosis – a controlled cell death that leads to the release cells gradually that digest the affected fat cells in the months after the treatment, reducing the thickness of the fat layer.

What can you expect? 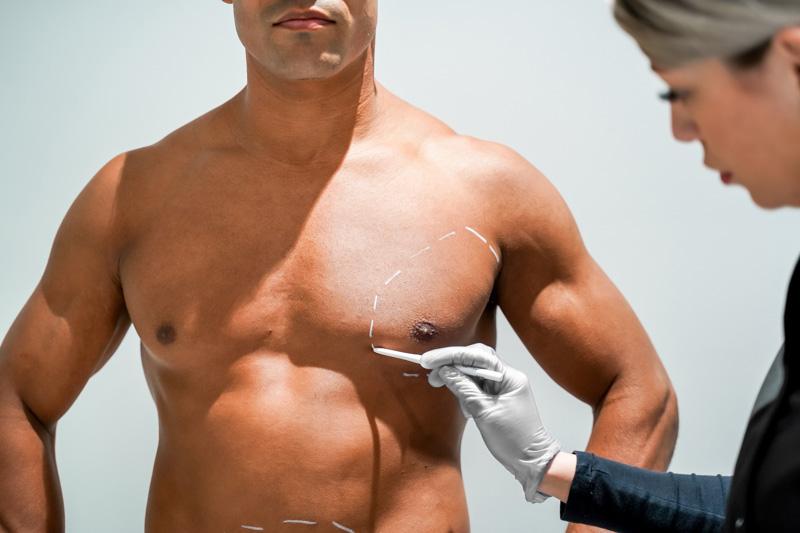