Removal of diet and exercise-resistant tummy fat is one of the most common concerns for male and female cosmetic surgery patients. This comes in the form of a tummy “pooch” post pregnancy and localized tummy fat that can be difficult to get rid of even after exercise and dieting. The unique non-surgical alternative that delivers controlled thermal shock is Cryo T-Shock.  This treatment is considerably different from other non-surgical modalities used for non-invasive fat destruction and body contouring: cryolipolysis, radiofrequency, high-intensity focused ultrasound, and laser therapy. Cryo T-Shock is not limited by treatment area size or location. Other body sculpting technologies destroy fat by initiating necrotic cell death of the targeted tissue. Historically the challenge has been targeting the right tissue depth and avoiding unintended damage to other structures close to or within the fat layer. Cryo T-Shock treatment is different as it causes fat cell apoptosis – a controlled cell death that leads to the release of cytokines and other inflammatory mediators that gradually eliminate the targeted fat cells. Inflammatory cells gradually digest the affected fat cells in the months after the treatment, reducing the thickness of the fat layer. 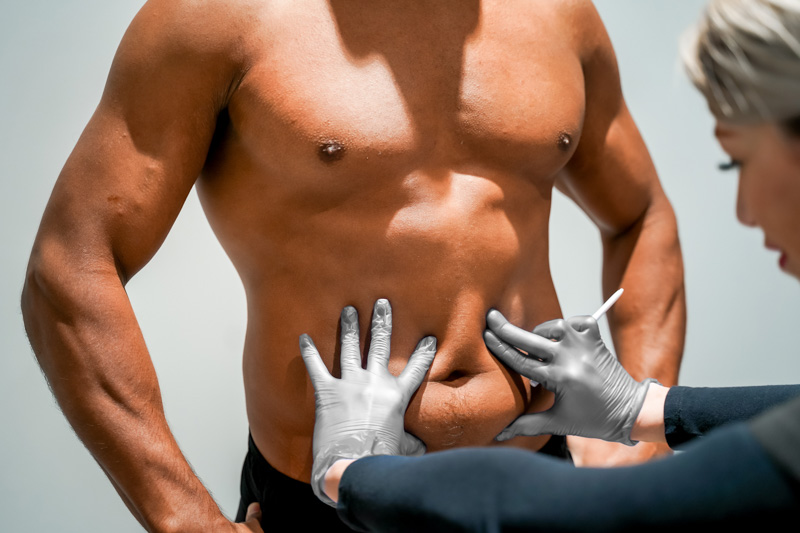 The different functions and processes which take place in the body are caused by chemical reactionsoccurring between hormones and receptors. These are carried through the body through the blood stream. The areas of the body which have a lot of adipose tissue (fat) tend to have a poor blood supply. This means the blood borne hormones which trigger lipolysis – the breakdown of fat – are unable to reach the fat cells and therefore the fat cannot be broken down. CRYO T-SHOCK stimulation cools the surface of the skin very rapidly. The body reacts to this extreme cold by turning up its metabolic rate to produce heat. The blood vessels in the area expand, leading to an increase in blood flow, allowing the hormones in the blood to reach the fat cells and break down the fat.  The temperatures that are delivered by a CRYO T-SHOCK treatment induced lipolysis – the breaking down of fat cells – to reduce body fat without damage to surrounding tissues. Subcutaneous fat cells are naturally more vulnerable to the effects of cold than other surrounding tissue. Exposure to cooling causes fat cell apoptosis – a natural, controlled cell death, which leads to the release of cytokines and other inflammatory mediators that gradually eliminate the affected cells. Inflammatory cells gradually digest the affected fat cells in the months after the treatment, reducing the thickness of the fat layer. Lipids from the fat cells are slowly released and transported by the lymphatic system to be processed and eliminated. The controlled thermal shock delivered by the CRYO T-SHOCK is fundamentally different from other non- or minimally invasive modalities. Other methods of fat removal primarily involve necrotic cell death by damaging fat with heat, high-intensity focused ultrasound, radio frequency, gases or chemical injections. Each of these approach poses potential technical challenges, particularly with respect to targeting the right tissue depth and unintended damage to other structures close to or within the fat layer.

What can you expect from Cryo Fat Removal Treatment?

Have any questions or want to book a CRYO Fat Removal consultation?
Get in touch and we can find the right treatment for you.